Why Stock/Shares Isn't a Substitue for Salary

There’s been an increasing trend in Stock/Share Options, RSUs, and employee share purchase schemes, some of which are hyped up to give the impression that they’re worth more than your base salary. While, in some cases, this is true, there are as many examples of where it definitely is not.

When you join the companies who use these schemes as part of your compensation package you are usually given a monetary value of shares which gets converted into an actual number of shares around when you get your first pay packet. This means that the value, of, say £100,000 is only relevant for a month or two, and that, after that, the value of the shares is the thing which dictates how much the stock or share component of your compensation package is worth.

Publicly traded stocks go up and down all the time. Sometimes the reasons are easily identifiable, like a drop in profits, sometimes whole market sectors just fall out of favour and all the companies see their share price fall without any specific company showing signs of failing. This means if you get a £100,000 stock grant and the price falls by a large amount, that part of your compensation package will take the hit.

If you think this is highly unlikely to happen then take, for example, Deliveroo.

If you had pre-IPO shares, and could cash out at the moment they floated, you’d have done well. Deliveroo is now widely known as one of the worst performing IPOs the London Stock Exchange has seen. On the first day it fell by 25% in value, and, despite a small rally, and is now around 25-30% of its original IPO value.

Today (18th Feb), if you were finishing your 6 month probation period (which is normal part of being employed for most UK tech employees), any shares granted when you joined are worth a third (~33%) of what they were worth when you joined. That’s right, in 6 months the price has dropped by roughly 66%. 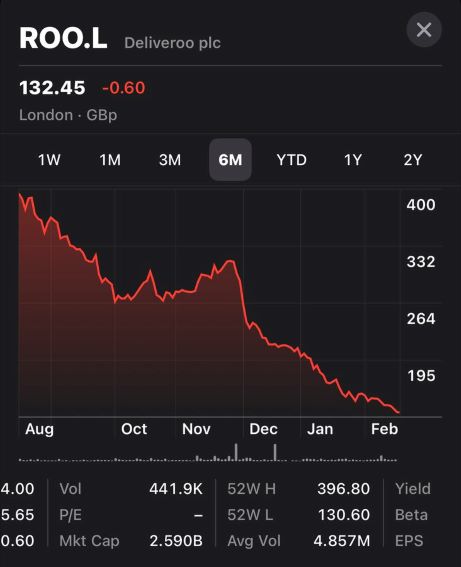 Some folk may think Deliveroo is special example and have concerns over the company, but it’s not alone. You can look at a long-term “popular” tech company, say Twitter, and find examples of where the price has taken a big hit (e.g. at the moment it’s down ~55% over the same 6 month period); 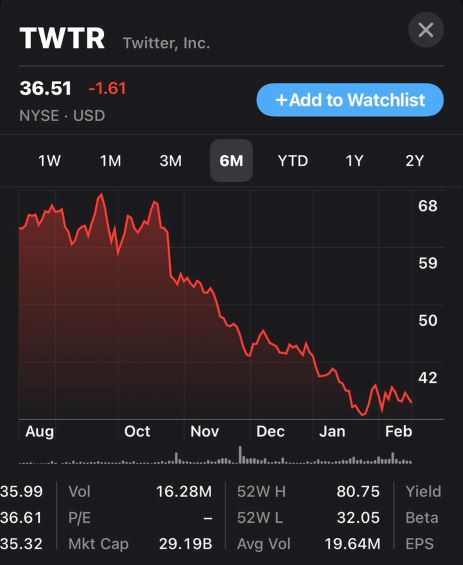 There are a number of other examples of companies where the share price has fallen significantly, meaning that a £100,000 stock award can end up being worth half, or even less.

My advice is to be careful when negotiating your compensation for a job. Stocks and shares are basically a gamble, so make sure your base salary covers everything you need, and gives you some extra, and don’t be lured in by a very low base with large amount of your income resting on how well publicly traded shares perform.